The Sacred Fire – Transform the stories that block you 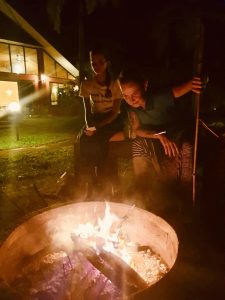 The Dark Moon lay hidden and the stars shone bright. We would need those stars at the end of the ceremony, but first we had work to do. It was time to let go of the stories that block us. Eight sisters stared into the flames. All of us from different lands (Italian, Hong Kong, Chinese, English, Irish, Thai, Malaysian, Singapore), but all sharing a common culture: the age-old tradition of storytelling.

‘Storytelling is part of what it is to be human.
We are all natural storytellers, so do not worry, your stories will come.
It is up to you whether you share them in the circle, or just with the fire.’

We performed this ritual several times at Museflower this year – both on the Museflower Life Festival Retreat and Soul Bliss Retreat, but the night of the New Moon was intensely powerful. I took a deep breath and began to prepare myself to hold the space. Some stories define us and letting go of them is not always easy. There was a crackle of expectation in the air. One person said that this was the part of the retreat they were most anxious about: the letting go of old stories that hold us back (and can block our writing too). 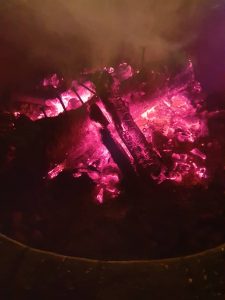 Humans have made storytelling circles around fires since time immemorial. The first stories were handed down orally, from mouth to mouth, some in song to music and not written down. Mary Renault wrote a wonderful book about the Ancient Greek tradition of oral storytelling in The Praise Singer.

The first stories written down (in writings such as the Bagavad Gita, the Upanishads, the book of Genesis in the Bible, the Egyptian stories of creation) are about how the earth came into being, how humans were created. They give humanity a sense of its source and answer the age old questions at the centre of philosophical enquiry: who am I, where did we come from, what created this wonderful world?

Then there are our personal stories, the stories of our birth, how we made our first entrance into this world, gasped our first breaths. Our birth story we hear from our mothers, but we all carry the memory of that first trauma (and all births are a quest) within our subconscious memory and can be released. 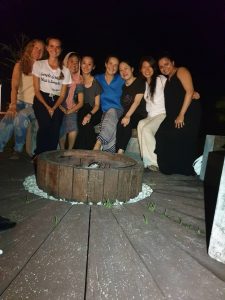 ‘Tonight I invite you to let go and release to the fire the stories
which hold you back.’

There were tears and there was joy as the old stories were offered to the fire and we watched them transform. For some letting go was painful – as one of us said,

‘I don’t know who I am without this story.’

Our personal stories define us. They create beliefs which then set in motion a series of stories (modern psychology calls these ‘patterns’) that play out again and again with different characters, in different locations, but that that stem from this one initial story. It may have been the story of our birth, or a childhood story or a story that caused pain in adulthood that we have brushed under the carpet to protect us from more pain – but which instead gains more power over us as we act out the drama again and again.

We thanked the stories for the lessons they had taught us and watched as the edges of the paper they were written on glowed orange, then crumpled into a black charred ball, watching the smoke spiralling up into the night sky.

I believe we only come to the Sacred Fire and the stories which need to be transform only arise from the shadows when they are ready. On the night of the New Moon we all let go of a story that was blocking us.

‘Now comes the fun part!’ I said.
‘We might feel empty without our old stories.
We also experience relief and a welcome lightness of being.
Now I invite you to lay on your backs and look up at the stars.’

Laying on our backs, we reached up and took a star in our hands, brought it to our chests and made a new story – a story with a positive belief behind it, a story with the power to propel us into a bright, shining future.

‘By Letting Go of Stories which no longer Serve us,
We create space for New Stories to be Born’

Thank you to the brave storytellers who shared their tales, and to the warriors within all of us that rose to the challenge and created new stories from the ashes – like the phoenix, we transformed that night under the stars. And thank you to Tania and the Museflower team for hosting the Sacred Fire.

The next Sacred Fire ceremony will take place in the UK in June for Mid Summer’s Eve.

The next Sacred Fire in Thailand will be October & November 2019. 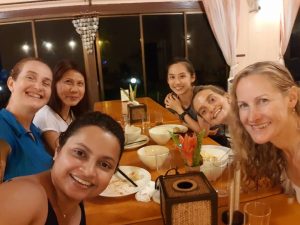