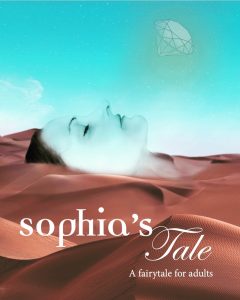 A BOOK WRITTEN FROM THE SOUL IS A QUEST

This story started in 2003 and has been part of the winding path of my life for fifteen years. In 2004 I had a brain injury and could no longer write fiction. So I developed a method of writing from the intuition that was less taxing for my brain and during my recovery I wrote Sophia’s Tale. I call this method Soul Writing and now teach it internationally. Although Sophia’s Tale is written in simple language as I was coming to grips with English and recovering my memory, the historical, theological and linguistic research is extensive. Sophia exercised my intellect as well as my intuition!

SOPHIA’S TALE is available in All Amazon marketplaces in paperback or eBook.
For readers in the UK click here: SOPHIA’S TALE on AMAZON UK

THE FREQUENCY OF TRUTH

Sophia’s Tale is a retelling of the Gnostic Christian myth commonly referred to as Pistis Sophia. My inspiration came from a version of the Pistis Sophia, (the Askew Codex) in the British Library. Sophia means wisdom in Ancient Greek, and Pistis Sophia can loosely be translated into English as Faith Wisdom. The decision to keep the female personification of Faith Wisdom out of the Bible was likely made at one of the ecclesiastical councils during the fourth century AD. There are many versions of the Sophia myth. The version in the Askew Codex is unusual in that it portrays her as a divinity fallen from the Light into matter. Sophia’s Tale is my attempt to give Sophia her voice back and make this moving story of the fallen woman and her courageous quest to redeem her soul accessible to the modern reader. I believe that truth has a frequency and that although this story has been hidden in darkness for one thousand six hundred years, people’s souls with hear that frequency, recognise it and the know it to be true.

There are several sentences or phrases in the Askew Codex (written in Coptic) that are a mystery even to scholars. The manuscript was bought by the British Museum in 1785 from the heirs of Dr. Askew, and is catalogued as Askew Codex MS.Add.5114 in the British Library. It is possible the book was hidden at some point in fourth century Egypt, when non-canonical texts were condemned as heretical, a copy of an earlier Greek original. The book contains Jesus’ secret teachings to his disciples after his resurrection on the Mount of Olives and the story of Holy Sophia’s, or Faith Wisdom’s fall into matter, and her journey back to the Father. Ultimately, it is a very human story about finding your way home. 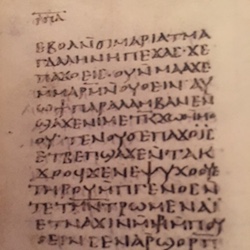 Coincidently, at the same time I was researching the manuscript, the Moscow Library of Foreign Literature was undertaking a new translation of the mysterious sentences which have stumped scholars since the codex was purchased by Dr Askew in Georgian London. I mused with Dr Nersessian (the curator of the manuscript) that the mysterious sentences which have defied translation might be Christian mantra – along the lines of Hindu or Buddhist mantra. We agreed that it was plausible for early Gnostic Christians to have used mantra to achieve gnosis (self-knowledge). Having been brought up a Catholic, I was compelled to understand why this book, with female teachers and positive role models for women, had been condemned. Who were the people who held this book sacred? In my debut novel, Rufius, I attribute authorship to the Ophites, but it could have been the work of any the numerous Gnostic groups during the second to fourth century AD, such as the Valentinians, the group led by Saint Valentine. Remarkable he’s still celebrated today considering he was condemned, along with all Gnostics, as a heretic. The book (or collection of fragments commonly referred to as Pistis Sophia) was likely a sacred text for several Gnostic groups.

I had a strange experience during months spent studying the Coptic manuscript’s translucent pages in the Oriental Reading Room in 2004. As I chanted the Gnostic mantra to myself I was transported to a scriptorium in my imagination and have used this ancient mantra in my spiritual practice ever since. I believe both the mantra and the story carry the potential to bring our souls into alignment with our innate wisdom, and guide us on the path of our destiny. Sophia, the Gnostic Christian goddess of Wisdom can guide seekers of wisdom “home” to their authentic self.

You can buy the book from Amazon in paperback or eBook here: SOPHIA’S TALE on AMAZON

– A playwright, a psychoanalyst, a novelist and a monk said this about Sophia’s Tale:

Beautifully and imaginatively written and resonating deeply in the realms of allegory, Sarah Walton takes us on Sophia’s fascinating journey of adventure, magic, sex, survival, personal resourcefulness and hard-won wisdom as she pursues her elusive dream in the Land of Impermanence.

Exquisitely written, Sophia’s Tale crosses the disciplines of literature, depth psychology and mysticism. It begins as a fairy tale for adults and then transforms into a wonderful story of individuation as Sophia, lost in her search for the diamond light of love, treads the harsh path of loss and isolation. Abused and abandoned she recovers her soul and becomes the source of wisdom that was her birthright.

To paraphrase the ending of the tale Sarah Walton leaves us a gift in The Land of Impermanence, this realm of adventure and self-discovery where there is so much potential for transformation of the soul. She casts a rainbow light and is a guide in the darkness for the lost souls of the earth when all other lights go out.

Beautifully and simply written the story is pure enchantment – an act of soul writing, a trance state transmitting a vision of the deep psyche. Yet the themes of the dreadful pain and suffering resulting from distorted desire is a “call” to many in the modern age who are torn apart on the path of sexual longing, when what they are seeking is love and self-fulfilment.

The tale has a special relevance for the female fascinated but abused by the narcissistic male. But since, allegorically, “female” equals “soul” and “narcissistic male” signifies our contemporary world obsessed with its wealth, power, and grandiosity, then this is a tale for the recovery of the soul in an age of destructive illusion. Such is the depth of the tale that it is not only for our age.

It is also a version of the gnostic myth of Sophia who longing for love, breaks from the heavenly pleroma and through her anguish, grief, and shock undergoes a path of redemption in the fallen world of matter.

Sophia’s Tale is rich, deep and a delight to read. Its penultimate paragraph tells the author’s tale: “wisdom speaks to those who seek her guidance in whispers and shadows, in visions and through the language of dreams.”

Sophia defies easy categorisation. One could call it a fairy tale for adults, but it contains no one-dimensional morals, and the monsters our heroine confronts are all too real. It is essentially a story of becoming, and the steps that one woman takes to actualise her potential. There is certainly enchantment in its dreamy abysses and glistening vistas, but all too often, magic is just another deception, a veil in the cocoon of veils that stand between us and clear sight.

This is a tale of compassion and cruelty, community and betrayal, love and abuse, promise and disillusion. Don’t be surprised if its echoing resonance brings to mind other ventures into the archetypal, like a dance of the major arcana, or a plunge into the rabbit-hole of the unconscious. Whatever wells our author is drawing from, they are dug very deep, and sometimes they run bitter with salt.

Tread in Sophia’s footsteps and learn what she learned. I assure you, you will not find this a comfortable read; but then, as Blake reminds us, wisdom is not bought with a dance in the street.

Words whispered softly down the centuries, times of old and new, past and future, words of wisdom, tales of woe. Actions of innocent love, abandon and the lessons they bare. This is Sophia’s tale, written in a heartfelt, honest way. A pleasure to follow her journey, be a part of her story, for a moment, be a companion, a silent shoulder.

It’s such a joy to read the reviews on Amazon and the fantastic feedback from readers on social media. It makes the journey feel worth it and feeds the soul. Truth has a frequency and in my Soul Writing work I advocate that if a writer or singer-song writer writes from their authentic self, the reader / audience will hear with their heart and recognise that frequency. 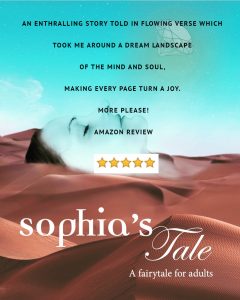 SOPHIA’S TALE is available in All Amazon marketplaces in paperback or eBook.
For readers in the UK: SOPHIA’S TALE on AMAZON UK

Please add a review if you like it – reviews are gold dust for writers and help other readers decide if it’s the right book for them.

Enjoy the read – fairytales are best read at bedtime!